In the video that surfaced online, Tunde Ednut who is well known to be a fan of Asake as he is well known for heaping praise on him following his success in the music industry with his hit songs topping charts was seen with Asake, TG Omori and others ahead of his show at the Brixton Academy, in London. 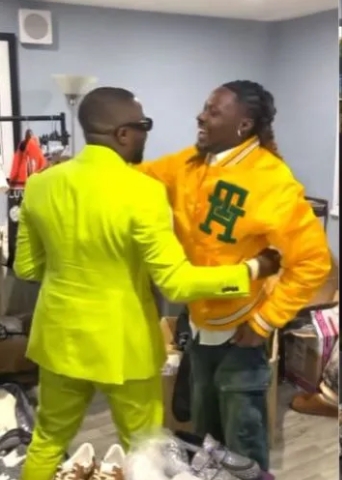 Tunde Ednut showing how much he likes Asake upon sighting him exchanges hug with the “Joha” hitmaker then gives him a handshake and that was just the beginning.

The blogger further sparked reactions among social media users as he bends down for Asake while they were together noting that he can’t wait to see him on stage.

Unfortunately, Concertgoers were left disappointed after Asake’s show organizers were forced to bring the show at Brixton Academy to an end due to a security breach.

According to information making the rounds online, Asaka was unable to perform because the venue was too small for the kind of crowd he is controlling.

Sharing the video, Tunde Ednut wrote; When I love someone, I go all the way for them. I had to surprise him. REAL PEOPLE, They mean the world to me. #NoHomo TOO MUCH TALENT IN ONE ROOM!!! #GREATNESS.

I love ASAKE so much. I had to get on the plane to show support at his last show (for now, make dem stop to play. Many more shows dey come) in London. Unfortunately, the venue was too small for the kinda crowd he is commanding. But he’s coming back! 02 we dey come!”

Watch the video below (Swipe to view);