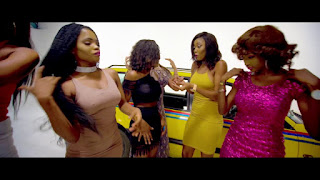 Popular star Base One takes it back to the streets on this one, with fellow streets ambassador, Small Doctor. The Gbefun video was partly shot in the heart of Computer Village in Ikeja, a major location in Lagos that represents the real people on the streets and the good work they stand for.
The energetic and hugely hilarious video is directed by Frizzle ”n” Bizzle Films, and it features cameo appearance by the producer, Phantom, as well as Que Peller, Airboy, Junior Boi, Chinko Ekun, Beezy, DJ Real, DJ Khoded, Mallow Reelz, amongst others.
There is some comic acting from members of a very strong cast of dancers, models and extras. Base One and Small Doctor themselves also lit the video up with some really good dance moves, alongside Awanjo Dancers and Pinki Debbie.
Download watch and share below!!!