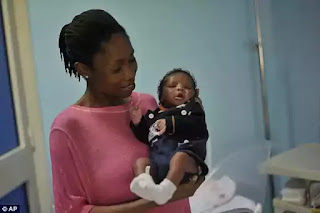 A 200level student of banking and finance gave birth to a bouncing baby boy all by herself without the help of her roommates or friends yesterday 25th of January , 2016, at the female girls hostel at the main campus (university of Abuja) She delivered of herself a bouncing baby boy within the early hours of 3am to 4am.
According to source, she was asleep when she heard some noise. She discovered that some one has just delivered herself of her baby without any complications or pain. Although she gave birth on her own without even her roommates knowing until the baby was out, she was unable to cut the placenta connecting the child to his mother. The hostel portress was called, who after seeing the incident and couldn’t do anything about the placenta, later called the university school clinic nurse, who came with some medical equipment and ambulance an later cut the placenta and then took the child to d ambulance waiting outside the hostel.
The mother actually walked on her own without any help to the ambulance without any help and then back to the hostel to get a flask of hot water after the school clinicians have seen to her and her baby. She was later discharged from the hospital that same day around 9am.
COMMENTS FROM HOSTELERS:
Her neighbor,
I was asleep when I heard some noise, by then my roommate who went out to ease herself came back shouting “somebody don born o!!! Somebody don born!!!” It was strange at first because for someone to give birth in the hostel was strange. We ran out to the next door where the event was going on but they locked the door, so we had to peep through the window. The mother and the newly born baby were seated on the floor where her water broke and blood. We called the portress who told them to put of the fan and that she couldn’t cut off the placenta. That was wen the school nurse was alerted. She came 10-15 minutes later and cut off the placenta. The patient walked to the ambulance herself and whole event ended by 5am.
LOUISE JOSEPHINE( Theatre art 200 level):
I heard of the news around 8am. It happened within the early hours of the morning. She gave birth with ease and no complications. They locked the rooms because of onlookers. She delivered her baby without any notice by her roommates until after delivery.
KEMI AKEREDOLU( Miss banking and finance 200level):
The mother of the new born baby is a good friend of mine. She delivered herself of a bouncing baby boy. After this event, I think she is a very strong lady because, this is her first time and for her to give birth on her own and still have the strength To walk on her own to the ambulance and still have the strength to walk back to the hostel and then to her house, is marvelous and miraculous. She is blessed and happy born day to her child(a blessed child).