A suspected thief has been captured on tape writhing in pain after a swarm of bees pounced on his hand for stealing.

He reportedly stole from a man in Makutano, Kenya and the person visited a native doctor to help him catch the thief.

The herbalist then did some incantations and ordered bees to go and gather the hand of whoever stole the goods. 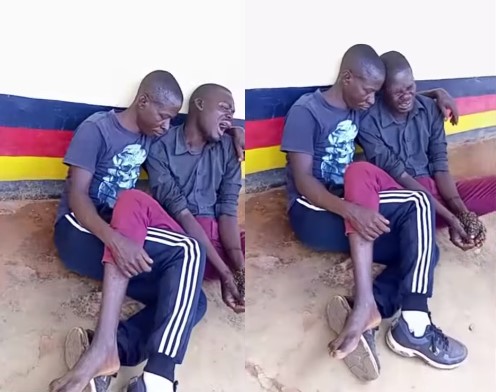 The jazz apparently worked and the bees went straight to the hand of the thief who ran to the nearest police station for help.

He reported himself and confessed to the crime, so the police went in search of the person whose item was stolen, and he in turn contacted the native doctor.

A video making the rounds online shows the thief crying out as the bees remained on his hand and were causing him unimaginable pain.

The man could be seen begging the people to help him, but they chose to film and make a mockery of him.

The native doctor eventually arrived and proceeded to perform a ritual for the bees to disappear, but he stated that the thief must also parade himself round the community as a way of shaming him for the act.

After doing the incantations just outside the police station in Makutano, the thief then walked round the community in shame.