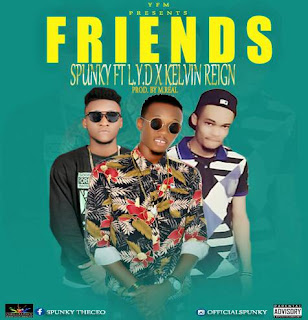 Christopher Edom Ogechukwu (CEO) AKA Spunky promised never to let his fans down by giving them more hits all the time, He has so many hit songs. For the promises he made, he decided to give you guys this track titled “ FRIENDS “. featuring L.y.d & Kelvin Reign.
Spunky has also Featured many star’s since his last single titled “WHEN I DANCE Ft. Big.G, He is dropping this Top  song again titled FRIENDS, produced by M.Real. Y’all gonna love this song since we all have Friends..(WHAT ARE REAL FRIENDS?)
DOWNLOAD NOW