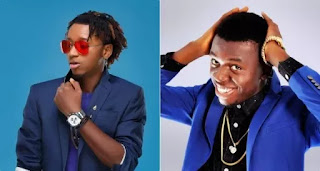 For using a rapper in his controversial joke, Nigerian comedian, Akpororo has been warned that he could take a bullet for it some day.
Nigerian comedian, Jephthah Bowoto popularly called Akpororo has been in a serious standoff with musician, Yung6ix after making an allegedly silly joke during a show.
Akpororo had advised Yung6ix that he should have invested 3.9 million naira he used to buy drinks at a club to get him a hit song instead of misplacing his priorities. The joke which was a serious hit at the musicians because of his inability to deliver hit tracks has seen the two square it out on social media.
Yung6ix had expressed shock over the controversial joke saying:
Taking things a little far, DJ Timmy (Yung6ix manager) threatened Akpororo saying that his jokes will get him killed one. He wrote: