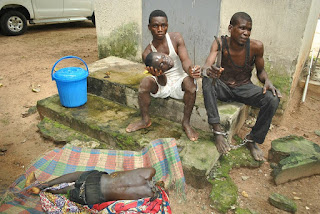 On Saturday, 26/08/2017 following a sustained monitoring by IGP Special Tactical Squad attached to Niger State Police Command two notorious ritualists were arrested in possession of human head of one Hassan Abubakar “m” of Bakajeba Paiko L.G.A .
The suspects Abdulrasheed Aminu “m” 22yrs old of Lupa and Ismaila Mohammed “m” 27 old of makera all confessed that they cut off the head with use two sharped knife and one of the suspect Ibrahim surname yet unknown of Paiko L.G.A still at large.
The father of the victim one Abubakar Shuaib said that his son was last seen on Saturday 26/08/2017 taking a kettle of water from the house to give an unknown person waiting outside and since then he was nowhere to be found, until he heard that Police arrested suspects with human head and he identified the victim as his son. Case under investigation.
See more graphics photos