BBNaija 2021 finalist, Emmanuel has managed to spark reactions among netizens as a video of him having a romantic moment with his new girlfriend, Chioma Nwaoha Blessing hit the internet.

Recall that during the BBNaija season 6 edition, Emmanuel and Liquorose were an item as the relationship between could be considered stronger than their colleagues as their fans created a ship called “EmmaRose”. 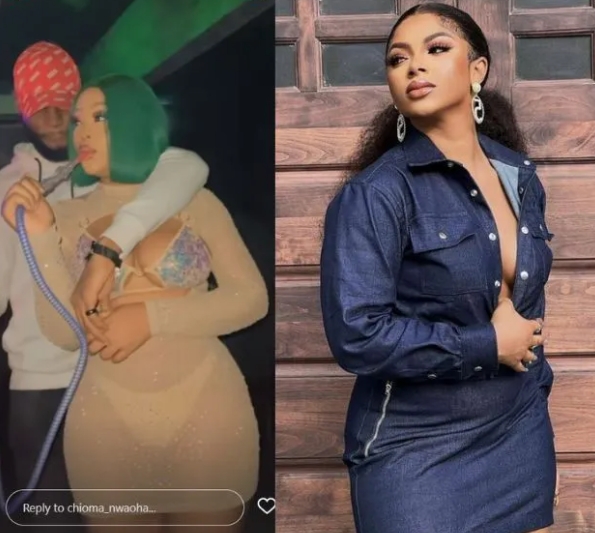 However, the relationship between the duo publicly hit the rock during the BBNaija season 6 Reunion in June 2022 as they spit out the difference between them.

According to Liquorose, the dancer said while they were in Dubai she walked in on Emmanuel with a girl in a room and lights were off and further accused him of cheating. She added that after confronting him he didn’t feel remorseful.

Emmanuel on his own part said the girls was an old friend and copulation never happened between him and the female friend but he decided to end the relationship because it was not working. He also denied dating Liquorose and by extension they unfollowed each other on social media platforms.

Meanwhile, in a recent video making the rounds online, Emmanuel was seen enjoying his best with his new girlfriend Chioma as they get cozy while dancing at a nightclub.

In the clip, Emmanuel was behind Chioma, wrapped his hand around her swayed side to side for some moment and also talk silently to each other ears in the process.

The video has generated several reactions, while many said Chioma is the perfect lady Emmanuel has been wanting as they noted that she has banging body compared to Liquorose, other shared their contrary opinions. See below;

ukainmargaret: Let him enjoy he is still young and single.

jacqmiracle: I wonder what gives some entitlement over Emma,we all saw that in the house Emma wasn’t in love..in all honesty Rose is a spec n marriage material,but Emma wasn’t into her..Rose moved on,she is happy. Free Emmanuel,he is free to mingle..

clare_ck: This is the body the King wants👌🥂.

okafi_: It’s people throwing Rose shade on a post that doesn’t even concern her. Measuring a girl’s beauty by boobs ! SMH. If they aren’t showing chest, this one here could never hold a candle to Rose. It’s the disrespect and underestimation for me. 🤢

aliceoppongdamprane: Hope he’s happy, that’s all that matters and not just a show off🙏.

cutejayty: I wonder for guys o. You have a spec, why not stick to it rather than deceive ladies you know ain’t your spec and end up breaking their hearts. Toorhhh.