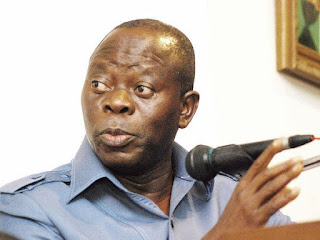 According to Daily post, Immediate past governor of Edo State, Comrade Adams Aliyu Oshiomhole, has admitted that President Muhammadu Buhari is sick.
He, however, said the sickness was not as worse as many people may believe.
He said the recent visit to the ailing president was a clear indication that those wishing him death have been put to shame.
Speaking with Vanguard on the development, Oshiomole described Ayodele Fayose of Ekiti as a mad man who is out to disgrace others.
He said, “President is sick but it is not as bad as what people are saying. Some were carrying rumor that he was on life support but people have seen at least that, that is not true.”
On the constant attack on the president by Fayose, Oshiomole said, “I don’t like to discuss Fayose because when he makes his statements, it only reminds me of an Igbo proverb which says that if a responsible man is having his bath after a hard day’s work and he removes his dress in a local bathroom and a mad man carries the dress and the man bathing, seeing that the mad man has carried the dress, he runs out Unclad pursuing him, people will see two Unclad people running and they will say two mad men. So, sometimes, you just allow the mad man to carry your dress and go rather than joining him in his madness.
“One of my very good friends wrote something in the papers criticizing the pictures taken during some APC governors visit to the President, he said maybe a broadcast would have been better. But I ask, if the head of a family is sick and some people went to see him, first there is nothing unusual about that.”