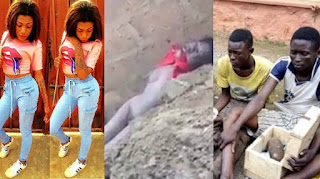 It was reported that The Dome-Kwabenya Police force arrested four boys in connection to the murder of a Facebook Bosschick, Lydia, aka DC Queen, who met her untimely death on Wednesday morning. She was found Unclad in the Dome Kwabenya area murdered, with her tongue and v.a.gina cut off.
The four, James Opoku, Yusif Ahmed, Akwasi Addae and Muhammed Abdul-Sadeek, are alleged to be engaged in fraud boys. Their confessions are yet to be noted. 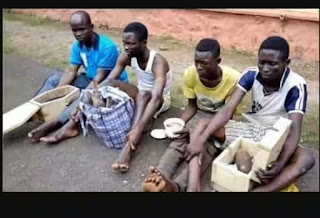 Following the information on what NsromaMedia.Com gathered on social media, the slay queen hangs out with fraud boys, popularly refered to as Sakawa boys. From social media feed, nothing good is being said about her company and clearly, she is a victim of ritual killing. Here is how she looked like after the killing.