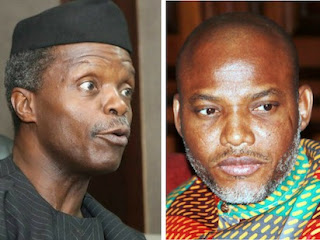 *Demands immediate withdrawal of charges
*As IPOB berates Umahi over attack on Ebonyi traders
By Ikechukwu Nnochiri & Chimaobi Nwaiwu
ABUJA— Leader of Indigenous People of Biafra, IPOB, Mr. Nnamdi Kanu, yesterday, tackled the Acting President, Prof. Yemi Osinbajo, for declaring the Biafran agitation unconstitutional.
Kanu, in a world press conference he held through his team of lawyers in Abuja, maintained that Osinbajo’s view about Biafra was “patently misconceived and inherently faulty,” despite his rank as a Senior Advocate of Nigeria.
In a statement by his lawyer, Mr. Ifeanyi Ejiofor, Kanu insisted that “extra judicial remarks” Osinbajo made before the Igbo Council of Traditional Rulers, in reference to Biafran agitation, was offensive to section 2 of the 1999 Constitution, as amended.
The statement read in part: “We are presently drifting into the narrative that had hitherto kept our client in unlawful incarceration for 18 months, in clear breach of positive orders of court that directed for his unconditional release. Unhealthy interference by the executive arm in the matter before the court, vide pronouncements capable of putting fears in the court is a case in point.
“This is evident in the recent extra judicial remarks by the Acting President, clearly contained in his presentation before the Igbo Council of Traditional Rulers, that the agitation for Biafra is unconstitutional as it offends section 2 of the 1999 Constitution of the Federal Republic of Nigeria, as amended, 2011, and consequent threat of arrest and imprisonment of those that exercise their unquestionable and inalienable rights to self determination.
“This declaration is respectfully considered as not only provocative and unacceptable, but a clear case of undue interference with judicial process, which have the capacity of distorting the mindset of the judicial officer in charge of client’s case.
“It is important to remind the Acting President that our client’s present political trial originated from his legitimate exercise of his constitutionally guaranteed rights to self determination as clearly provided for under extant laws, and international instruments/covenants.
“It is, therefore, reasonably expected that any of such extra judicial remarks should not emanate from the revered office of the Acting President.
“With due reverence to the Acting President, and his rank as a Senior Advocate of Nigeria, we deem it obligatory to state the correct position of the law as it relates to his faulty position.
“We observed most respectfully that the learned silk made this remark in direct response to quit notice threats and ultimatum handed down to Igbo living in the northern part of the country, by a faceless and uninformed group, going by the name of Arewa Youths Consultative Forum.
“But it must be noted very humbly that it is a mistake to equate the lawful and legitimate aspirations and agitations for Biafra with the unlawful, illegal and illegitimate quit notice, and threat given to the Igbo to leave the North by this group.
“We submit most humbly that the right to self determination, recognizable under various instruments, which Nigeria is a party to, is clearly provided for under Article 20(1) of the African Charter on Human and Peoples Rights (Ratification and Enforcement) ( Act Cap 10) Laws of the Federation of Nigeria 1990.”
Besides, Ejiofor, who briefed newsmen alongside counsel to Kanu’s co-defendants, Chidiebere Onwudiwe, Benjamin Madubugwu, David Nwawuisi and Bright Chimezie, accused the Federal Government of deliberately frustrating full-blown hearing on the treasonable felony charge against the defendants.
Consequently, Kanu and his co-defendants, demanded an immediate withdrawal of the amended five-count charge against them, saying they have not committed any offence that is known to law.
IPOB berates Umahi for attacking traders in Ebonyi
Also, yesterday, IPOB and its leadership worldwide have berated Governor Dave Umahi of Ebony