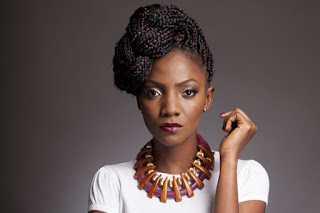 Nigerian female pop star, Simi has no doubt stroke some wrong chords as she ridicules Nigerian men in an interview.

Recalled that the music star, said Nigerian men are not romantic as most of them have been structured into believing they do not have to be romantic. Thus, they hold a very high sense of entitlement.

Indisputably, Simi who was speculated to be in an intimate romance with Adekunle Gold and Falz, raised brows over her submission and Nigerian men in their views no doubt rubbished her intuition.

Jimoh Abiodun in a chat with Celeb Police, he revealed it’s very wrong on the singer’s side to have generalised her claims.

Abiodun said, “I will say it all depends on one’s perception on the concept of being romantic.

“I strongly believe that all men are romantic in their own unique ways, the fact remains that individual differences dictate/influence the level of being romantic among men.

Seun Shotonwa, however claimed Nigerian men are too occupied to focus their attention on romance in a relationship.

He asked, “Romantic? Will she eat romance? Or she’s not well? �” Is it me that’s thinking of how to survive that will be thinking of being romantic?

“I’ve been sick for some days now due to stress. Please tell her to go outside the country, she will surely find a romantic guy.” Shotonwa said.

For Gabriel Alabi, Nigerian men are romantic but tend not to show it to the ladies.

He said, “We are romantic but we tend not to show it, because when it’s being shown, we portray ourselves as being weak.

“A typical Nigeria man, will want to show his wife what he is made up of. In the process of doing this, he forgets that women are fragile, all they need is your attention, care, cuddling, sweet words not superiority. I believe that’s the feeling Simi has.”

Akoh Godday believes the singer, has been reluctant so far with men she’s into.

“If Simi says Nigerian men are not romantic, it is a strong indication that the man in her life is not romantic enough to her expected standards.”

Well, Simi’s intuition might be birthed from the fact that she needed someone romantic.

In view of this, Celeb Police advises her to hunt for another man if she’s been treated like white rice.