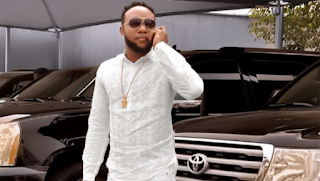 Popular Nigerian star and five star music legend Kingsley ‘Kcee’ Okonkwo says his bid to contest the Anambra governorship election holding in November is not a joke.
The singer had last week announced his intention to run after sharing a campaign banner, whose slogan read: “Peace and enjoyment for all.”
Following his announcement, several celebrities have towed the same path, making many question the seriousness of any of them.
But Kcee insists that he’s keen to run.
“My campaign manager said I should not speak much about it and that’s what I’m gonna stand on. I’m gonna be making official statement about it but trust me it’s not a joke,” he told HIP TV.
“I think the youth has to speak up and that’s what I’m saying right now.
“And I think you have what it takes to do it and I have what it takes so if you believe in yourself, make it rain.”
The singer has said he will use the proceeds from his forthcoming album to fund his campaign.
Explaining his decision to venture into politics, Kcee said he’s interested in making an impact on the lives of the masses.
He had said: “We have begun and there is no stopping us. Ladies and gentlemen I present to you the first project of – Attention to Detail movement – The Album proceeds from this would be used to further our campaign project. Do not leave this space. The world is not ready for all the plans we have in store.”