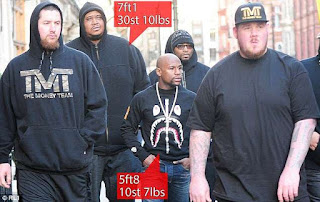 Floyd Mayweather’s bodyguards do not travel on the same plane with him because they are too big.
Floyd Mayweather’s big bodyguards can’t fit in his private jet, so they take a separate one to follow him around the world.
Mayweather is known to be followed by bulky body guards who are part of ‘Money Team’.
According to BBC boxing correspondent Mike Costello says, the big bodyguards don’t fly with the 40-year-old in his private plane.
“They are huge, huge men – Men so big, by the way, that he won’t let them fly on his own private jet,” Costello said.
“He believes that that kind of bulk cannot be lifted by a smaller jet like that so he has another jet specifically for his bodyguards.”
Off course the undefeated boxer can afford it, he is worth over $340m according to Forbes and is set for another big payday with his upcoming fight against Conor McGregor.
Depending on pay-per-view sales, Mayweather could add another $200 million to his career earnings.