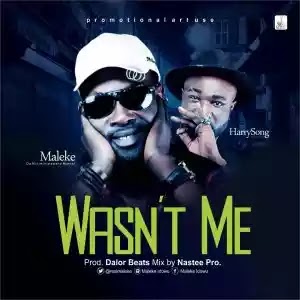 Popular Nigerian singer and comedian Maleke have teamed up with Arabanko crooner Harrysong for a new song Wasn’t Me.
Maleke Moye Idowu is one of Nigerians most successful comedian turn musician, born on the 14th February in Benin city, Edo state.
Following the release of his first official single in 2017 after a long break from the Entertainment scene, MY LIFE featuring Comedian GORDONS. The song gained massive airplays both on national Radio and TV stations.
This brand new single which he teamed up with alterplate records CEO, HarrySong is titled “WASN’T ME”.
DOWNLOAD NOW