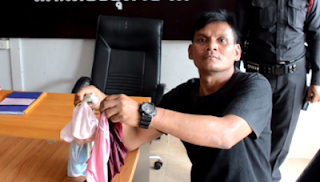 Security guards at a hospital in rural Udon Thani province today busted a Thai man stealing women’s panties which were hung out to dry in the sun.
The guy claimed that they were a gift for his girlfriend. Narin Prasertkaew, 38, was later charged for theft.
In his possession, police found four pairs of nylon panties.
What do you think Cuties??