A Nigerian lady has ended her relationship with her boyfriend for proposing with N10,000 ring.

A Nigerian lady has caused a stir on social media after ending her reletionship because her boyfriend proposed to her with a cheap N10,000 engagement ring.
According to a Twitter user @dearolaa, her friend called off her relationship over claims of being proposed to with a cheap engagement ring.
When asked how she found out, she stated that she had once seen the same ring from an Instagram vendor.
Lady breaks up with boyfriend for proposing with N10K engagement ring
Read the write up below:
“My friend got engaged and cut off the engagement immediately because her boyfriend proposed with a 10 thousand naira ring. I asked how she knew it was a ten thousand naira ring then she said she has seen it on a vendor’s Instagram post before. 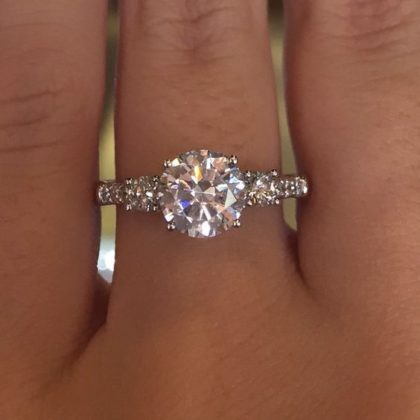 Can you imagine? Would you propose To the love of your life with a ten thousand naira ring? I feel so bad for her because this is what we have been praying for but the guy messed it up with the choice of ring.
That kind of ring can turn another color in few weeks 😢 but then I feel she should have accepted it cos Some guys don’t even bother proposing with rings they just say it with words and they still move on.
I hope you don’t throw this away even though I don’t like the idea of a ten thousand ring myself. Dear Mojisola, I know you can see this try and reconsider his offer. Xoxo ❤️” 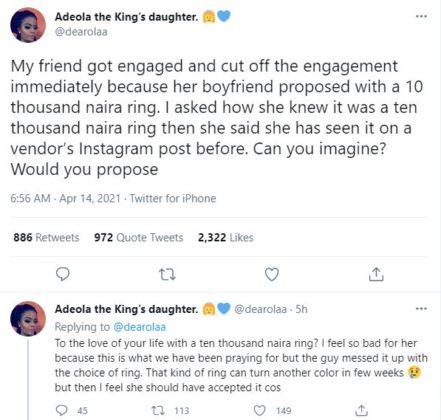