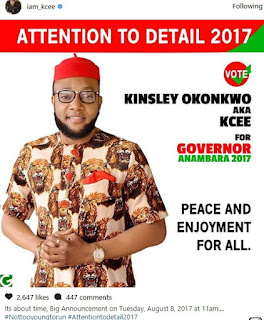 On Thursday, Five Star Music act, Kcee broke the internet when he shared campaign posters for his governorship election campaign with the theme ‘Attention To Detail’.
Apparently, the theme ‘Attention To Detail‘ is the title of his second studio album and he’s just released a statement to that effect saying he intends to use proceeds from the album to fund his campaign project.
His official statement reads:
“Goodmorning my people. The outpour of love and support recieved yesterday is truly unprecedented and i cant thank enough everyone home and abroad who reached out to us.When my team and i put together series of projects as our contribution to improving the lives of Nigerians, one key theme was paramount that these projects must have one sole purpose – IMPACTING THE LIVES OF THE MASSES. How can one create immense impact without influence? Hence we knew we must embark on the road to ensuring that we get to the position where we can take the right decisions that will favour all. With a strong sense of responsibility i announce that this journey has begun. I am not perfect and do not claim to have all it takes but my heart is pure and my intentions genuine. I will submerge myself in the next coming months to seeking necessary counsel and support in achieving this goal. I encourage every youth and all of my fans to join this movement of contributing our quota to the rescue of this great nation. We have begun and there is no stopping us’.
‘Ladies and gentlemen i present to you the first project of – Attention to Detail movement – The Album.
Proceeds from this would be used to further our campaign project. Do not leave this space. The world is not ready for all the plans we have in store’. 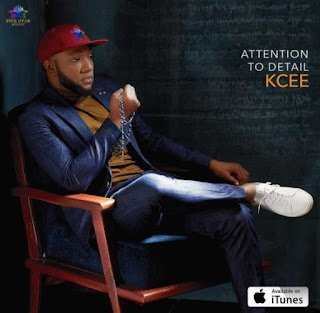