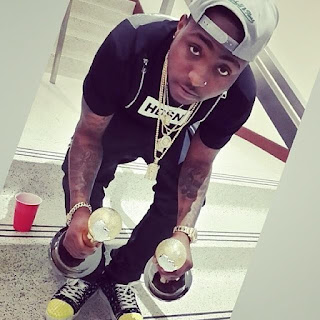 The nigerian popular star Davido who claims to have a whopping sum of NGN30 Billion in his bank account has again come up with a new claim, and this time he says he’s just 24 years of age but has worked so hard to achieve 60 years old goals.
The youngster is fast considering himself a fulfilled man due to the musical success he has attained over the years which in fans’ opinion is no way near that of the Starboy Worldwide Chief, Wizkid. However, Davido seems overly contented with what he has and doesn’t give a rat’s ass about what fans think of him in comparison to Wizkid. O.B.O no get time!!
As a renowned boaster that he is, he went on social media to inform the world about the goals he’s achieved so far in life which in his opinion outweighs him. The DMW boss who is currently on a tour took to his Snapchat page and wrote;
“I’m living my dreams mahn!!! 24 years old living 60 years old goals. Now, that’s goals!!! Vancouver was lit!!! Thank you again. Next stop will be Edmonton.” Well, that’s what the self-acclaimed “Omor Baba Olowo” thinks of himself.
See more his bags below!!
What do you think??? 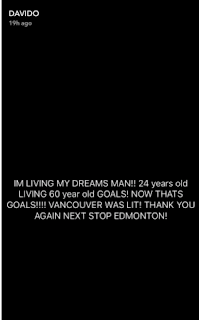