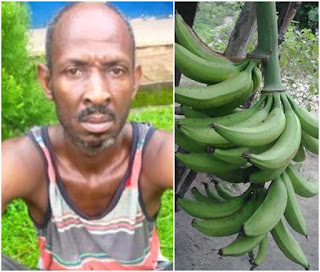 A plantain farmer, Moses Erutuya,  who caught a thief who stole 35 bunches, has been arrested for reportedly killing the plantain thief identified as Jonathan for stealing from him since 2007.
It was gathered that Jonathan was hit with a stick in the incident which happened at Odighi village, Edo State.
According to the Nation reports;
“I started the farm in 1998. In 2007, while waiting for the plantain to mature, somebody went there and stole 60 bunches. I complained and was told nobody will guard my farm for me. Since then, I have been monitoring the farm.
Luck ran against him this 2017 when he stole 35 bunches. I traced him to where he wanted to sell them. He said the plantain was not mine. He stole seven bunches from my farm. I asked him to go and show me where he got others. .
On our way, he stopped. The wood he used to hold his bike, I took it and hit him on the head and he died. His family was looking for him. They came to me and I told them I left him to go but I later took them to where the body is. I want government to forgive me.”
Speaking to newsmen on the incident, the State’s Police Commissioner, Haliru Gwandu, said the suspect would soon be charged to court.
Please Share This