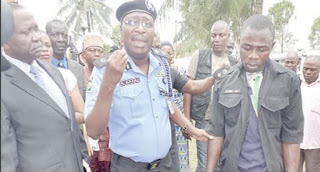 A man identified as David Fashina , who was nabbed in uniform, has been arrested by the Ogun State Police Command. Fashina who is also a motorcycle rider, allegedly stole two phones from a man in Abeokuta, Ogun State while wearing a police uniform.
Tribune reports that the suspect who was paraded last weekend at the police headquarters, Eleweran, Abeokuta, was arrested when one Dr Eniola (surname withheld) reported to the police that he was robbed of his two phones by a syndicate of two, one of whom was dressed in a police uniform.
Speaking on the incident, the state Commissioner of Police, Ahmed Iliyasu said;
“On the receipt of this information, Inspector Ajayi Ayodele, attached to Public Complaints Bureau, was detailed to investigate the case. In the course of investigation, the suspects were arrested and the phones were recovered from them. We also discovered that the suspect who operated with police uniform does not belong to the Nigeria Police Force. He only impersonated.
“Any policeman without an identity is not a real policeman, and the public should know this. The public should continue working with us so as to bring those who act as fake security agents to book,” Iliyasu advised.
Confessing to committing the said crime to newsmen, Fashina disclosed that he’s an Ekiti State indigene, but residing at Obantoko area of Abeokuta. According to him, t he committed the crime when he went to pick a commercial sex worker who was his customer.
“After picking the lady, I saw a man who was drunk and sleeping inside his car nearby, and I saw two mobile phones in his car. I picked the phones, took one and gave the lady the other one. I sold the one I picked for N90,000.” When asked how he got the police uniform, he used, Fashina said: “My father retired as a policeman; his uniform was only found in my luggage.