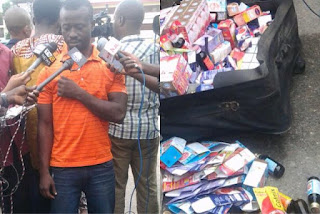 A 42-year old fake doctor, John Anopuem has confessed that he gave drugs to patients without prescription as such he could not say the number of the patients that may have died in the process of using those drugs.

He also confessed that he administered drugs through guess work. Sometimes it worked and at other times it was harmful to the patients which might result to death. The Orlu Imo State-born was arrested and paraded by the State Commissioner of Police, Mr Imohimi Edgar at Ikeja, Lagos.
P.M.EXPRESS reports that the suspect was arrested at his store located at Seriki Aro Street in Ikeja where the police also recovered some suspicious drugs as exhibits. Some of the drugs recovered from the suspects include Emzolin, Tuxils, Codeine and many others.
Parading the suspect with other criminals, Edgar said it was one of the efforts the police was making to make the state crime free that led to the arrest of the suspect. Edgar thanked the public for partnering with the police on his new police policy to combat crime in the state. He promised that the police will continue to put up their best and work with the public so that the criminal elements will have no hiding place in the society.
P.M.EXPRESS spoke with the suspect and he admitted that he was actually selling those drugs without giving normal prescription as recommended.
“It was a mistake I made and I could not say it was not harmful and I cannot confirm the number of the patients that may have died as a result of wrong prescription of the drugs.” He said.
He said if he was given another opportunity, he would not do such and hoped he will settle the matter with the police. But contrarily, CP Edgar said the suspect will be charged to court after the conclusion of investigation.