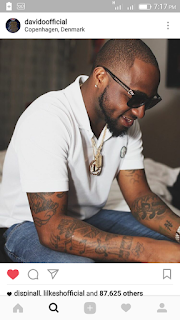 Popular Nigerian star and CEO DMW, Known as Davido whose single’s video ‘Pere’ featuring Rae Sremmund and Young Thug just dropped, has taken to Twitter to reveal that his label mate, Dammy Krane who is enmeshed in a court case, co-wrote the single’s hook with him.
And this song Pere is already making hit on social media, Check out there tweets below!!