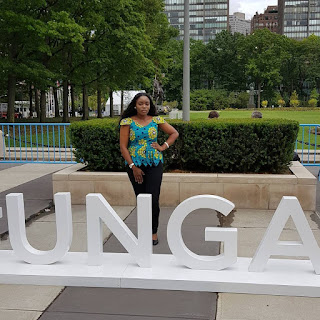 Below are pictures of ex-bbnaija housemate, Bisola at the United Nations General Assembly. She is currently there as an Ambassador for Girls Count, a campaign that promotes the girl child.
She also attended a dinner organised by Bill and Melinda Gates. In attendance were Amina J. Mohammed who is the current Deputy Secretary-General of the United Nations, Jaden Smith, Nikolaj Coster-Waldau (King Slayer in Game of Thrones) etc. She also shared Pictures she took with Black Eyed Peas’ Will.I.am and Nollywood Actress, Stephanie Linus.
She posted on Instagram:
My Day in a slide. It was a beautiful and eventful day. First with the Organisation of African first ladies, then the #goalkeepers Global goals Awards Dinner organised by Bill and Melinda Gates foundation. Also met the elegant @stephanielinus Video would be up later. Hope you are doing good, God bless you #girlcount #onecampaign