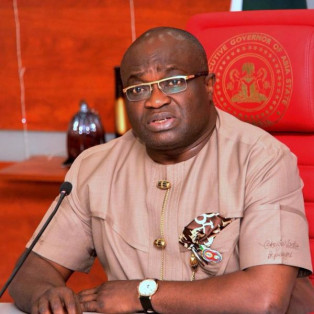 Abia State Governor, Okezie Ikpeazu, has said there is a clear division between the leader of the Indigenous People of Biafra (IPOB), Nnamdi Kanu and his father, who is the traditional ruler of Afarakwu community in Abia.
Ikpeazu stated this while taking questions from State House correspondents, after a meeting with Vice-President Yemi Osinbajo on Tuesday.
The reporters had asked him to react to the demand of a youth group seeking the dethronement of the father of the Biafra agitator.
“I clearly separate Kanu from his father. The processes of handling traditional institutions are enshrined in the laws of our land.
“And traditional rulers who are members of our constituency have the leadership they will do the needful at the appropriate time. But for me, I think there is a clear division between Nnamdi Kanu and his father,” he said.
Assuring residents of his state of their safety, Ikpeazu said the economy of Abia would suffer if “if we make our kitchen the theater of Biafra”.
“Nigerians know that for some time now that this group called IPOB was agitating for a separate nation called Biafra and that the home state of the leader of that group happens to be Abia state,” he said.
“As expected, when such things happen there is an interface between some members of that group and the military, and the theater was Abia state. And some people attempted to hijack that event to conflagrate our country.
“To the glory of God the rest is history, we are still working to stabilise the fragile peace in the region. I thank God also for the instruments he used to be able to keep our country as one. We are humbled by the privileges.
“I will continue to protect the lives and property of my brothers and sisters irrespective of where they come from. You know that the mainstay of our economy in Abia state is trade and commerce and I do not think it will augur well for our economy,”‎ he added.
Please Share This