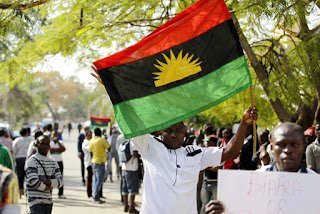 Acting Anambra State Governor,Known as Hon Willie Obiano, on Sunday afternoon confronted by members of the Indigenous People of Biafra (IPOB).
The incident took place at St. Joseph’s Catholic Church, Ekwulobia, Anambra State.
It was gathered though the scene was tensed, security operatives exercised restraint and caution
“Governor Obiano had gone to the church to worship, only to be embarrassed by IPOB members in their hundreds, if not thousands, who stormed the church in buses.
“They were chanting ‘No election in Anambra on November 18’. The Governor had to be smuggled out by his security details,” an eyewitness told News Express.
IPOB leader, Nnamdi Kanu, had declared that the forthcoming governorship election in Anambra will not hold, and other states in South East!!
But Obiano recently fired back and warned IPOB not to cross the line by attempting to stop a constitutional process.
What do you think??