A recent video of Davido daughter, Imade and Tiwa Savage, son, Jamil has surfaced online and by extension got many people talking.

In the clip that hit the internet, Imade Aeleke and Jamil Balogun were seen showing off rich kids vibes as they jet out of the country together. 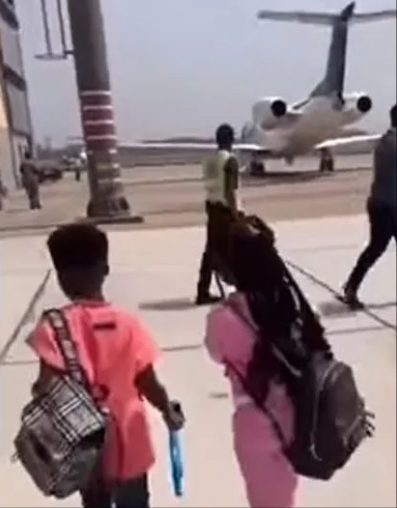 Recall that this is not the first nor the second time Jamil and Imade have dished out their friendship goals. Tiwa Savage son, Jamil has been spotted several times with Davido and Imade and the same applied to Imade also being with Tiwa Savage and Jamil.

However, Imade and Jamil further show that they bestie to each other as they jet out of the country together to enjoy the festive season together.

This is coming few days after Davido and his fiancee Chioma leave the country with family for Christmas.

Tiwa Savage was spotted in the jet involving her son Jamil and Davido daughter, Imade Adeleke.