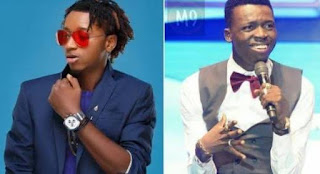 Following the threats from Yung6ix’s official DJ, Baddest DJTimmy, saying he has the nudes photos of Akpororo’s wife, after Akpororo made a joke about Yung6ix that he should have used the N3.9million he spent on drinks at the night club to buy a hit song.
DJTimmy in a video he posted threatened said he has the nude pictures of Apokororo’s wife, claiming she was a sex slave to a dancer, disclosed as PD and she also made five abortions for the dancer.
According to LIB who contacted the comedian about the threats or allegations, he said: “No reaction”
He was also asked if he will filed a lawsuit against DJTimmy, Akpororo said: “No need”
Akpororo was asked his reasons for not thinking of dragging DJTimmy to court, he said:
“No need. Don’t worry, they are just joking. No need”.