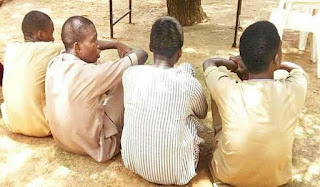 It was reported that Four final year students of Government Science and Technical College, Karniya, Jigawa State have been arrested over theft of 18 sets of mini laptop computers valued at about N1.4 million.
The spokesperson of the Jigawa State Command of Nigerian Security and Civil Defence Corps (NSCDC), DSC Adamu Shehu, disclosed this to Daily Trust over the weekend in Dutse.
The suspects – Shehu Abdulrazak, Abdullahi Suleman, Sani Abdulraham and Yakubu Abdullahi – are between the ages of 15 and 17. They broke into their school ICT centre and carted away 18 sets of the mini laptops while the school was on holiday.
“The suspects are final year secondary school students. They stole 18 sets of Samsung mini laptops after they broke into their school computer room. The laptops which each valued at N75,000 were supplied to the school by the FG.
They had already sold 12 of the laptops, each at the cost of N10, 000 at the Farm Centre, a mobile phone market in Kano. They were arrested when they came back to steal the remaining six of the laptops.”
Speaking, one of the suspects, Sani Abdulraham, said they used a rod to remove some pieces of blocks from the side of the building housing the school ICT and through which they perpetrated the crime.
Please Share This